The Mountbatten is more than a belief. Its power is proved by research:

„The Bluetooth® Smart Mountbatten, in combination with one of the most popular mainstream technologies to date, serves the purpose of including learners with and without visual impairments, on both technological and social levels.” (Wiazowski, RESNA Assistive Technology, October 2014, vol. 26, no. 4)

„The ease of depressing the buttons, the device’s ergonomic design, its speech reinforcement, its ability to correct errors, and the visual display on the MIMic make it a wonderfully enhanced brailling device.” (D’Andrea, Access World, January 2005, vol. 6, no. 1)

„However, [Mountbatten] is more than a PDA and more than a brailler. … For people who love „real” paper braille–as opposed to refreshable Braille displays–the Mountbatten combines the best features of an accessible PDA and an embosser. This makes it a powerful classroom tool, one that can be used to create a braille-rich environment, surrounding the braille reader with as much braille as his or her peers have print.” (D’Andrea, Access World, March 2005, vol. 6, no. 2)

„The following features of the Mountbatten were helpful in encouraging the students’ development of writing. Because the keyboard of the Mountbatten is arranged ergonomically and causes less fatigue in the hands and arms, the teachers believed that the students were able to braille faster and for longer periods.” (Holbrook et al., 2003, JVIB, p. 650)

„The advantages of using the Mountbatten for children with fine motor problems emerged as a major theme in the project’s data. The teachers stated that the Mountbatten was 'easier for the student to use,' 'the student can use one finger per key;'” (Cooper and Nichols, 2007, JVIB, p. 27)

„[The teachers] believed that well-defined, consistent raised-dot output, regardless of the strength of fingers, makes it easier for young students to read their own work.” (Holbrook et al., 2003, JVIB, p. 652)

„One set of teachers reported that their student, who was a dual media user, 'enjoyed reading on the Mimic what he brailled.' Another teacher indicated that for her student 'with behavioral problems, . . . the MB has motivated him to stay on task.'” (Cooper and Nichols, 2007, JVIB, p. 28)

„Another teacher reported, 'Our student was able to stay in the regular education class for instruction. The teacher was able to give the student more exposure to braille.'” (Cooper and Nichols, 2007, JVIB, p. 29) 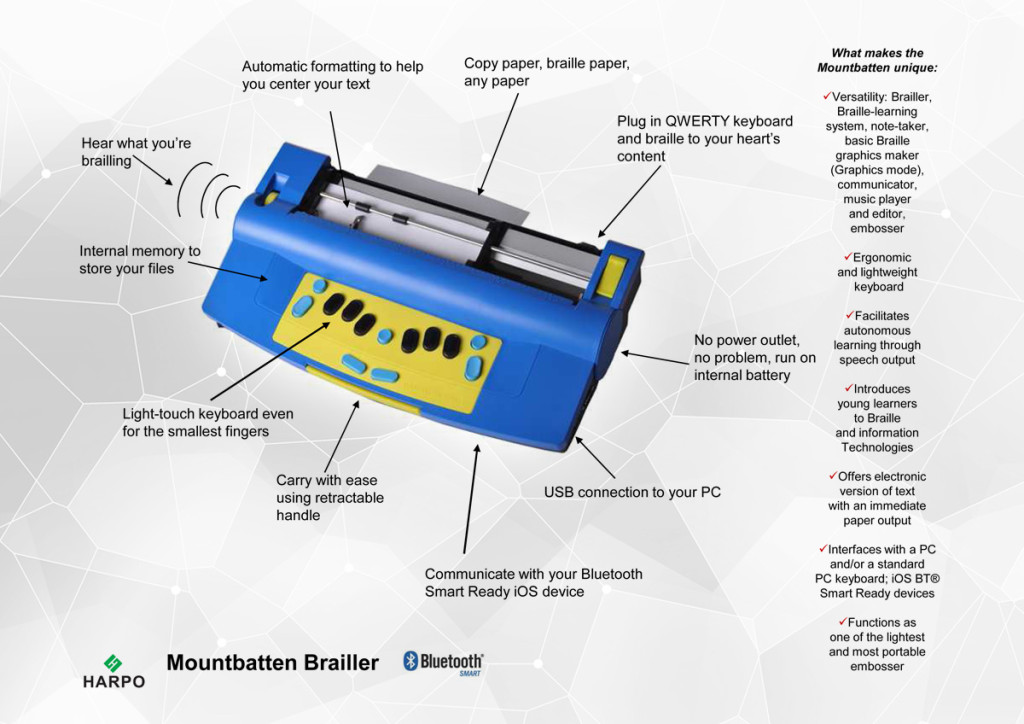